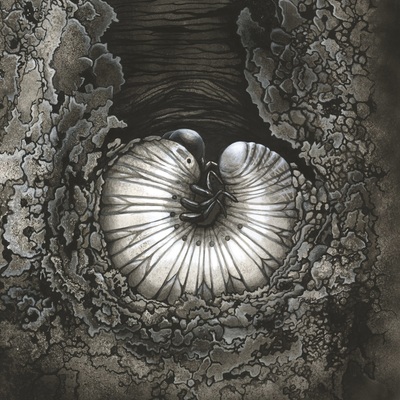 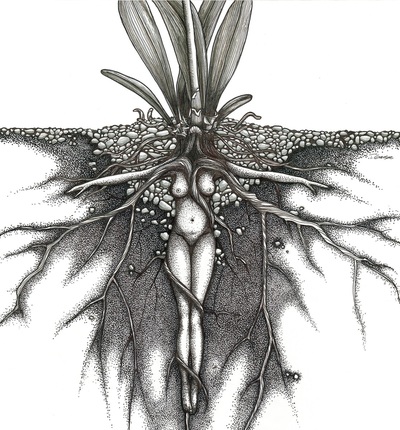 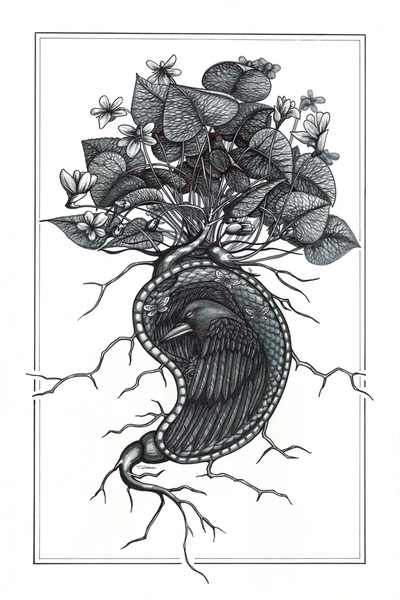 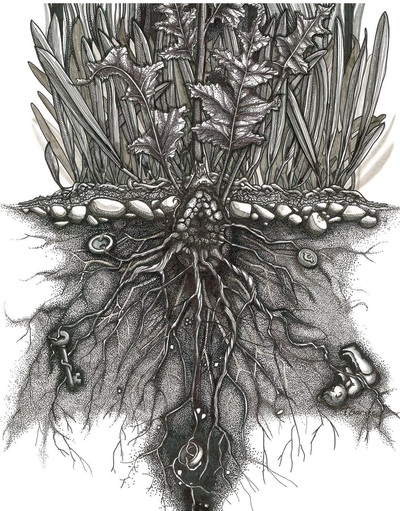 The dark splendor of Taffie Garsee’s “Dystopian Garden” issues a seductive invitation to experience a realm of emotion both fierce and familiar. In the airy upstairs gallery of artspace in downtown Shreveport, Garsee’s interwoven vegetation, meticulously rendered insects, buried birds, hovering human forms, embryos, seeds and ripe fruits create a world at once topical and timeless. Hers is an art devoted to deeply important experiences and ideas. Within this exhibition, Garsee offers up an outpouring of mordant observations, aspirations and heartfelt wisdom.

She describes joyous young life, fertility, the pain of death and decay, maternity, divorce and rediscovered bliss. Using images such as talismans, she weaves her stories without having to include every single word. Her work has an urgency about it born of a life that has seldom been easy. Yet the innate grace of her drawing sustains a triumphant voice possessing power and authenticity. It was her entry, “Greed Weed,” a tall vertical ink drawing on toned paper that earned Garsee her best-in-show award in February. This led to the opportunity of a one-person show and a full page in a national art magazine. With this new exhibition “Dystopian Garden,” the promise of the drawing “Greed Weed” has been fulfilled in a host of darkly elegant masterful drawings so finely detailed that they bring one right into her vortex of wonder and terror. Roots and tendrils of growing plants provide the armature for a group of related works. “Greed Weed” is the most explicit as the spores of greed spawn death atop a writing fecund weed grown out of the generous earth.

The easy charm of a five-part spring of flowers seems quite comforting until one realizes that the pretty pattern of the under-leaves is completely invented and man-made like the checkerboard pattern of a dress or tablecloth. What manner of genetic change has turned nature’s palette and patterns into an invention of man? Or are we doing this all the time? Of course we are. Supporting the jaunty sprig of problematic flowers is the hovering figure of a beautiful nude, her face and identity obscured by the mossy ground and dark tangle of roots. She, too, is part of nature’s generous ground of life as any mother knows. The nude is a creation of nature and part of her continuous process. Garsee is just coming into her artistic maturity after having children, entering into a happy second marriage and working in a doctor’s office for many years. No wonder she is comfortable with the irregular yet beautiful forms of living things, looking nature’s wonders straight in the eye. Her powers of observation and invention are tinged with heartache and great affection.

​Many insects prowl and chew and thrive in Garsee’s “Dystopian Garden.” A over-sized striped caterpillar munches contentedly in a lush landscape of ripe fruit and succulent leaves. He is a creature of majesty and beauty, a linear presence in a composition full of brilliant passages of light and dark, rough and smooth, curved and insistently straight patterns. Her leaves and fruit spill out from the confining drawn frame of the work, making it even more spatially complex and exciting. The most compelling of the paintings in the show for me is a self-portrait placed right in the middle of her imaginary garden. Like a 21st century Eve, Garsee celebrates the curved motion of several serpents as she proffers a ripe red apple to the viewer. She is surrounded by flowers and insects of all sorts, some traditional and benign, others menacing and edgy.

In a recent artist’s statement created for artspace’s registry long before she won the annual contest, Garsee said of herself, “I often speak before thinking, but by painting my thoughts, I am forced to think things out . . . my painting is thoughtful. On the other hand my words are often ragged and thrown at random. I speak in slang with my friends. I am often snarky and sarcastic ... I offend without intent ... But when I paint, I take time to make sure my work is as perfected as I can make it look, within the limitations of my abilities. I paint because I need to. It is my voice.” It is precisely her edgy, impassioned character that drives this work and gives it life and power. Garsee has seen and done a lot in her young life. It is all here. She owns it completely.

​One of her titles has the snarky tone she uses in conversation. “Mediocritis Sufficit” offers the false argument that mediocrity is enough. Of course she doesn’t believe this for a minute and is countering the sad sleepiness of much of human endeavor. Garsee is not settling for mediocrity or a little local acclaim, she is just beginning to show what she can do and it is a great deal indeed. What I admire most about Garsee’s work is its rich fund of surprise and thoughtfulness. One of the smaller drawings features an embryonic oval form containing the body of an ordinary blackbird in slumber or perhaps death. His body is ringed by attendant butterflies. The lining of the ovoid is described in a reptilian pattern evoking the remnant of an ancient connection between birds and reptiles. Out of the top grows a bunch of violets straining toward the sun. They are as carefree and gorgeous as a warm day in May.

At the bottom are sharp strained roots, drying out and dying resembling the claws of a bird in distress. Such is nature, a mixture of surfeit and decline. We had better accept the painful paradox and get on with it. How many of us can face the full program of life with such fierce candor, much less make beauty out of it? By sheer force of will and her great gifts, Garsee has created a memorable and meaningful show. May it be the first of many in venues here and beyond ."
DALLAS MORNING NEWS - ARTS & FEATURES -  November 14, 2015
Just hours from Dallas, Shreveport shows off its creative side
www.dallasnews.com/entertainment/columnists/michael-granberry/20140808-just-hours-from-dallas-shreveport-shows-off-its-creative-side.ece